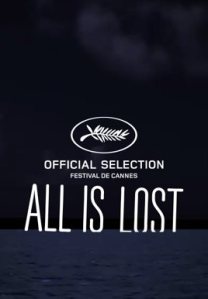 The call of the sea. It promises solitude, adventure and a profound connection with nature both at its most beautiful and peaceful and at its most awesome and terrifying. All Is Lost, a new film by J. C. Chandor,  fulfills all these promises while offering a compelling commentary on the indifference of nature and of humans.

As the film opens, an unnamed sailor, played by veteran actor Robert Redford, wakes up one day to the sound of trickling water. Astonished, he soon discovers that an enormous shipping container full of shoes has smashed into one side of his boat. The crash occurs right above his communication equipment, so his GPS and radio are all lost to the rushing water.

He quickly and efficiently sets to work to repair his boat. He is an experienced sailor and very soon he seems to have the situation under control. But the hole on his boat is the least of his problems. Without a functioning radio, he is unable to make a mayday call when a monster storm leaves his boat even more badly damaged. 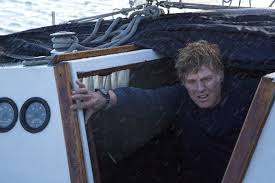 With hardly any dialogue, no flashbacks or flash-forwards, we experience, more than just watch,  the sailor’s ordeal as he drifts in the middle of the ocean. Stories of those lost at sea always make us ask questions about endurance and survival. What does it take to survive? Why some fail and others succeed when faced with impossible dangers and catastrophes? What type of character is common to those who survive?

As we ponder on these questions, the film also offers deeper commentary about an individual’s place in society and our modern emphasis on consumerism. Navigating solo in the middle of the ocean, the sailor is as far away from civilization as one can possibly be. But he gets a painful and unsavory reminder of it pervasiveness when his boat gets hit by the shoe container. The images of gigantic freight ships loaded with cargo as high as buildings; massive, indifferent, blindly moving forward in the ocean, are a clear metaphor of our thoughtless obsession with consumption and our indifference towards the consequences this obsession is having on our lives.

In contrast, beautiful underwater shots of the sailor during his most vulnerable moments remind us of our isolation, of the circles we form around ourselves as individuals, as societies, and as countries.

In an opening monologue that remains mysterious even after the film ends, the sailor apologizes about his fate. We are left to wonder about his life on land: who and what did he leave behind?  Is his fate a cruel lesson for his search of solitude and isolation? We don’t know, but in the end, it is humanity and not technology (that of his GPS, radio or life raft),  that remains. It is as simple as a single hand in the darkness helping us to navigate our way out of the depth of our despair.

4 thoughts on “All Is Lost”

Calling all youth ages 13-18 wanting to write!
My friend Daniela and I are featured on the newest edition of Richmond News talking about Identity Pages, our writing mentorship program for youth. Swipe left to read!
Happy New Year! Feliz Año!! Woo 🎊🎉🍾
A final 2020 blog post on The Things We Love.
Finding the joy within even when celebrating very quietly this year. I’m just grateful, so grateful🎄 From the bottom of our hearts, we hope you find the joy within today and always.
We have been working hard all fall and we are happy to open registrations again for our new program Identity Pages.