After suffering through months of hype, last weekend I was finally able to see 12 Years a Slave, the newest film by British director Steve McQueen. It tells the true story of Solomon Northup, a New York musician who was kidnapped and sold as a slave in 1841. Adapted from Northup’s 1853 memoir of the same name, the movie chronicles in detail the horrors Mr. Northup had to endure during his 12 years as a slave in the Deep South.

Any story about slavery is a story about injustice. 12 Years a Slave shows us a double injustice. That a free man could so easily be captured, shackled and sold as a slave without the kidnappers facing any consequence, is one part of the horror this movie so powerfully depicts. It demonstrates the vulnerability of free blacks in a country that saw them more as a commodity than actual human beings.  The other injustice is the horror of the system of slavery itself, and the fact it was an integral part of the plantation economy of the American south in the 19th century.

As an audience, we think we are familiar with the themes and the visual vocabulary of stories of enslavement; just last year Quentin Tarantino’s Django Unchained brought slavery to movie theaters in a spectacular and disturbing fashion. Many films have already shown us the humiliation, the injustices, the physical labour. We have seen the cotton fields and the sugar cane plantations. We have felt the heat, heard the mournful singing. We have seen the physical punishment, the blood on the slaves’ backs. In 12 Years a Slave we see all of this, in a most graphic and horrific way. But somehow, in this movie, we see more.

We see Solomon, an educated man, struggling to write a letter. After he is captured, he manages to find paper, but has no pen or ink. As a slave, he has already suffered the loss of his identity (his name has been changed to “Platt” by his captors) and we feel his desperation and frustration as he is reminded of how voiceless he is as well. In a way, to write is to exist, but Solomon is deprived of the one act that could make his situation real to anybody who would read his story, real even to himself. It’s a devastating scene.

Another devastating one shows a dance at his owner’s house, Mr. Edwin Epps, played by the brilliant Michael Fassbender. We have already seen the madness and the cruelty of this man in the way he runs his plantation. But here, the camera puts us right in the middle of the dance, the colorful dresses and the cheerful couples taking all the space on the screen. But then the camera makes a sharp turn. What we see then is a sort of subversion of a 19th century painting, its field of vision suddenly expanded to reveal the dark secrets that have been kept beyond the frame: the musicians entertaining the guests are three slaves, their faces saying loudly what their instruments can’t. More than any scene of torture or lashings, it is here that we feel most deeply the shame and humiliation of Solomon and the other slaves: they are so out of place, so diminished as human beings, small and lost in the darkest corner of the room as they play the music that entertains their masters. 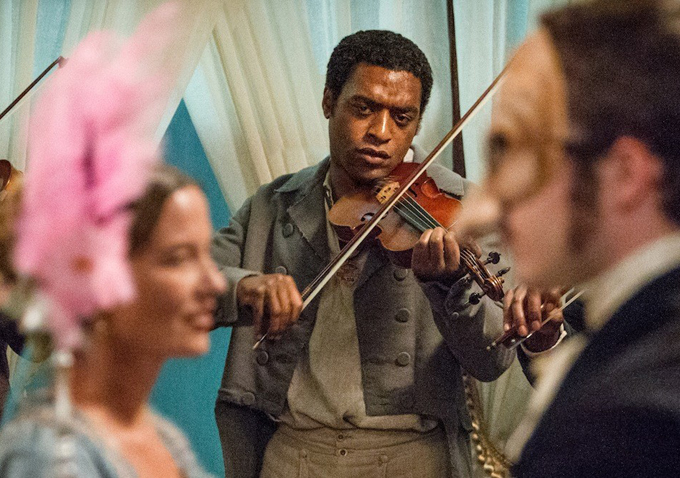 Throughout the film, McQueen finds ways of quietly revealing the horror of Solomon’s situation by placing his camera on a certain angle and leaving it there for minutes, giving us no direction other than to look, to really look at what we are being shown. He does this with sound as well, at one point forcing us to sit through an excruciating long scene where we see and hear a man fighting to survive after being precariously hung by the neck on a tree. You may want to turn you head around, to not see or hear; and you may do it. But this story and these facts won’t go away, no matter how much we wish they had never happened.

The plight of women slaves is also terrifyingly conveyed through the story of Patsey (Lupita Nyong’o), Epps’ favourite slave. Small and thin, she picks double the cotton per day than any of the men slaves. Unfortunately, this wins her no favours: she is repeatedly abused by Mrs. Epps and by Epps himself, who predictably, often visits her at night. We know of the systematic sexual abuse many women slaves endured, but what McQueen successfully evokes is Patsey’s psychological state, the profound depression and desperation that leads her to have suicidal ideations.

A critical success since it debuted at the Toronto International Film Fest last year, 12 Years a Slave has been nominated for many awards, including a Best Picture Oscar. But don’t see it because of that, that’s really unimportant.  Watch it to see Chiwetel Ejiofor’s performance as Solomon, to see his face as he realizes what consequences a conversation he just had may have on his life. See it to hear the voice of a man silenced for years raise up and join others in singing. See it not to learn about slavery, nor to feel outrage or sadness at its injustice; these should be givens. See it rather to feel the weight of history rest heavy on your shoulders and be reminded that you are never allowed to forget it is there.

4 thoughts on “12 Years a Slave: Feel The Weight Of History On Your Soul”